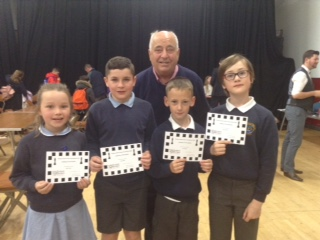 Published on: 29-05-2019 15:41
Rory, Connie, Fraser and Lucas represented the school today at the Scottish Borders Schools' Chess Tournament, 25 schools took part this year, playing five rounds in the heats. Our players opened in a strong position winning all their games in round 1. In all they won 10 games and drew in 3. Unfortunately it was not enough to make it to the semi finals but our result was an improvement on last year's performance, when we won 8 games. The competition was won by Glendinning Primary for the third year.
Our players were enthusiastic, courteous and really enjoyed their chess games. They were a credit to the school, as commented on by Cllr Sandy Aitchison who presented them with a certificate for taking part.
We are already planning strategies for 2020!
(Sharon Dalziel)